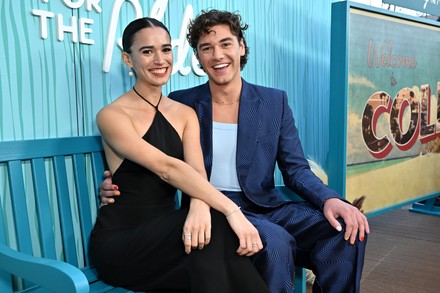 Belmont Cameli and Emma Pasarow are set to star in A&E’s new series, “The Bay.” The show follows the detectives working on the case of a young woman who has been found dead on a beach.

Belmont Cameli and Emma Pasarow will star in A&E’s “The Bay.” The series is set in and around the fictional town of Beacon Hills, California, which is surrounded by a bay. “The Bay” is produced by Michael Davies (“Psych”) and directed by Brad Silberling (“CSI: NY”). The series also stars Max Brown, Lauren Wright and James Van Der Beek.

What is the plot of the film?

Belmont Cameli and Emma Pasarow have been tapped to star in A&E’s new series, “The Bay.” The show is set in the fictional town of West Bay and follows the residents as they cope with the aftermath of a devastating tsunami that hits their community. Belmont and Emma will play Kim and Tanya, two close friends who are struggling to rebuild their lives while also dealing with their personal demons. The cast also includes Glenn Morshower, Michael J. Fox, and Walton Goggins. “The Bay” is set to premiere on A&E in early 2014.

What do the two main characters want?

Belmont Cameli and Emma Pasarow are set to star in A&E’s upcoming series “The Bay.” The show is based on a true story of Belmont Cameli, who became the first person in history to successfully cross the Pacific Ocean by camel. Pasarow will play Pasarow’s wife, Emma. The show follows their journey across the Arabian Peninsula and back to civilization. “The Bay” is set to air in 2018.

Belmont Cameli and Emma Pasarow will star in the upcoming A&E series “The Bay.” The show tells the story of a young woman (Pasarow) who moves to the Bay Area with her boyfriend (Cameli) and quickly discovers that life is not what she imagined. She soon discovers that the city is full of secrets, lies, and deceit. Pasarow will play the lead role of Katie, while Cameli will portray her love interest, Nick. The two actors met while working on an indie film together and instantly bonded over their shared passion for acting.

Who else stars in the film?

Belmont Cameli and Emma Pasarow will star in the new A&E drama series “The Bay,” from executive producers David Kohan and Max Mutchnick. The show is set in the fictional town of Point Breeze on the shores of San Francisco Bay, and follows the residents and their relationships with one another.

Cameli (Sons of Anarchy, Nurse Jackie) will play Sofia, a bright and ambitious young woman who moves to Point Breeze with her young son after leaving an abusive relationship. Pasarow (Don’t Trust the B– in Apt 23, Almost Famous) will portray Nina, Sofia’s best friend since childhood who helps her adjust to life in town.

Tags: Belmont Cameli and Emma Pasarow to Star in A&E's 'The Bay' What is the plot of the film?